Harry Cork was born October 29th 1872 and died February 7th 1886 at just 13 years old. I had first seen Harry as a 7 year old boy in the 1880 census record living in the home of his parents William and Jane in Mazomanie, Wisconsin. I dutifully added him and all of his siblings to the family noting their ages etc. I happened to be more focused on determining if Jane was the mother of the first 3 children listed in the 1870 census or not (she isn’t-see William Cork Obituary blog) and was checking the British records for comparison. I committed the early crime of inexperienced genealogists, by not noticing the little hash marks next to Harry and his older brother’s Hugh’s name indicating that Harry was blind and his brother Hugh was deaf. 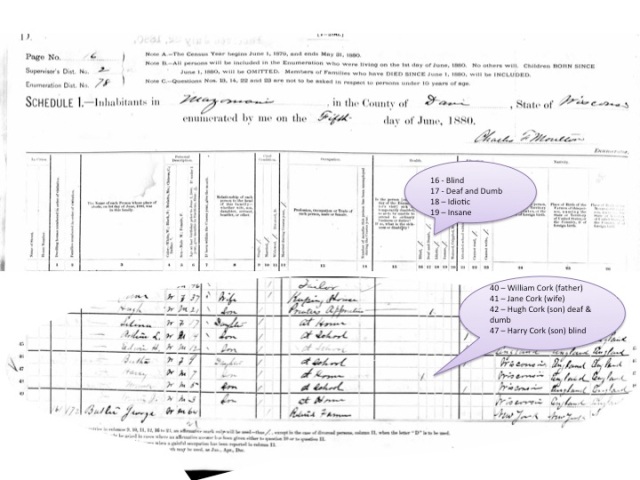 This is a huge reminder to really look at all the details of a record to see what they directly or indirectly might suggest. Luckily, when I was in Wisconsin in April, I found other records that helped me ferret out the details of Harry’s  blindness that I missed years ago. According to Harry’s death certificate he died of “paralysis of the brain” in the Village of Mazomanie, Dane County, Wisconsin. It is another sad example of a child dying too early in life and a vague cause of what it might have really been. Was it meningitis or some other infection? It’s hard to know with the state of medical diagnosis of the time. At 13 years old, there aren’t a lot of records for children in the late 1800’s. Fortunately, Mazomanie published a newspaper and there was an obituary for Harry that told quite a bit about his life, his death and the family.

The sudden death of Harry Cork, at his home here on Sunday evening last, aged about fourteen years, caused a deep pang of sorrow to the hearts of his many friends in this community.

The deceased, from early childhood, had been over-shadowed by the greatest affliction that can possible befall anyone, the loss of sight which obliterated from his vision the glorious sun-light and the beauty and grandeur of nature, he was blessed with such acute senses of hearing and feeling, and with the such buoyancy of spirit that his loss of sight was in a degree repaired.

He returned home from Janesville a short time since, where he had been attending the School for the Blind, which his health somewhat impaired, but he was not considered dangerously ill. On Sunday evening last he laid down to rest upon the sofa when the mysterious hand of death touched him and he slept. Without a sigh, without a murmur, he passed from time into the portals of eternity.

His funeral took place at the P.M. church on Wednesday morning at 10:30, Rev. Thos. Hodkinson officiating, and was attended by a large number of mourning relatives, and friends, notwithstanding the inclemency of the weather. 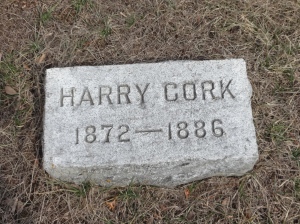 Harry was blind and went to the Wisconsin School for the Blind (which is still in existence).  His older brother Hugh was deaf and went to the Delevan School for the Deaf. William and Jane had 10 children and two of them had special needs in the 1880’s! Whatever challenges that might have been, nothing could have prepared them for Harry’s sudden death. The family and the town’s people obviously mourned the loss of this young boy. The more I find out about the Cork Family, the more there is to admire about them.