Sorry for the delay in postings these last few months, but as many of my loyal readers/friends know, I have moved from Seattle to Knoxville, TN. I am still in transition, so genealogy is taking a back seat to other priorities. 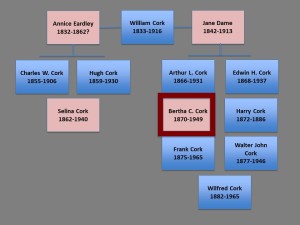 However, in my spare moments I have been thinking and continuing my research on William Cork and his ten children.  His daughter Bertha particularly speaks to me right now because of her independence. She shows remarkable courage moving to other states on her own and changing careers as a single woman at the turn of the century.  I am trying to locate more documents from her life, but through city directories, census records, a few mentions in the Mazomonie Sickle and a marriage license I am starting to get a picture of her.  What becomes clear from the records, is that Bertha was never afraid to try new things and explore new paths.

Bertha was born about 1870 (probably in Mineral Springs, WI) and raised in Mazomanie, Wisconsin.  With just 3 years of high school (per 1940 census) she taught school in rural Wisconsin and later in Minneapolis, Minnesota.  According to the 1896 and 1897 Minneapolis City Directory she was teaching, but in the 1899-1901 directories her occupation is listed as a seamstress.   It makes you wonder, did she get tired of teaching or was there an event that caused her to change careers?

At some point prior to 1908, Bertha moves to Chicago, Illinois.  She is listed in the Chicago City Directory in 1908, but it does not list her occupation.  In the 1909 directory, she has another profession – she is a nurse! I don’t know what type of education you needed to have to be a nurse at this time, but I suspect as a private nurse she may not have required any specific training.

At then in the 1910 census, when she is 39 years old, she is married to Frank Vye!  This begs all sorts of questions – How did she meet Frank? Was she nursing his mother Caroline who lives with him? He is a railroad engineer and two of Bertha’s brothers and her brother-in-law worked for the railroad in Minneapolis.  Perhaps one of them introduced her to Frank?

In the 1920 census, Bertha is still living with her husband Frank and his mother Caroline. Her occupation is recorded as “none”, but they have taken in the Miller’s as renters at the house on Maypole. Perhaps they needed additional income?  David Miller was also an engineer for the railroad, so perhaps they were friends or even relatives? Caroline Vye dies in 1923 and according to the 1930 census, the Miller’s have continued to live with Frank and Bertha. Frank dies in 1936 and by the 1940 census, Bertha is living all by herself.

I know from Find a Grave that Bertha dies in 1949 and is buried next to Frank at Forest Park Cemetery outside of Chicago. I cannot find a death certificate for her in Illinois or in Minnesota.  I need to check Wisconsin which might require another trip to Madison.  I wonder who cared for her in her old age?  She didn’t have any children (at least that I have found…) and I suspect that she would have needed a younger brother or nieces/nephews to help her when she got older. So, that is why the next step is to find out what happened to the house she owned in Chicago.  Did she leave a will? Something tells me there is more to Bertha’s story.

Next steps (most require a trip to Chicago or Madison):

Any other ideas I should pursue?

4 Responses to Bertha C. Cork Vye – It’s Never Too Late to Reinvent Yourself